Posted at 13:43h in In Memorium, News, Our History by Underhill

Charles David Underhill (Dave, or C.D.) was born in Vancouver on September 16, 1922 to parents Anne and Frederic Clare Underhill. During WWII Dave served as an officer in the Royal Canadian Artillery from 1942 though 1946. 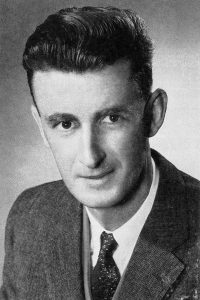 C.D. Underhill, President, Corporation of Land Surveyors of BC, 1952

He attended the University of British Columbia and received his Bachelor of Science in Civil Engineering in 1949. Dave articled to his father, Clare Underhill, and was commissioned as a BCLS on April 14,1950. Dave also became a partner at Underhill at this time. In 1954, Dave was registered as a Professional Engineer in British Columbia. Dave was elected to the Board of Management of the ABCLS in 1954, and served as President in1957.

Some projects that Dave worked on during his career:

In 1966 Dave became President of Underhill Engineering Co. Ltd. He was responsible for the direction of Civil Engineering projects undertaken with special emphasis on topographic and engineering surveying utilizing the latest developments in Electronic distance measurement and computing (link computing to <http://underhill.ca/land-survey-project/15/underhill-engineering-computing-services>).

Dave became a retiring partner at Underhill in 1983, with full retirement in 1988, he was also designated as a Life Member of the Association of BC Land Surveyors at this time.

Our sincere condolences to Dave’s family and friends.