Posted at 06:20h in News by Underhill

BURNABY, BRITISH COLUMBIA | 02.01.2020 – The Underhill Group (Underhill) is delighted to announce the appointments of Ryan Schuler and Jon Cormier as Partners. Both individuals are contributing greatly to the growth and expansion of our company and we welcome them to the partnership team.

Speaking on behalf of the existing five partners, Managing Partner Chris El-Araj  said, “Jon and Ryan have made significant contributions to Underhill in the regions and sectors they work in. We are very pleased to welcome them into the Partnership and look forward to the future with these two exceptional individuals as part of our leadership team.”

Ryan and Jon’s partnership at Underhill is effective February 1, 2020. 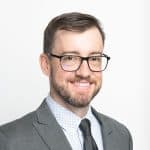 Jon Cormier is a British Columbia Land Surveyor and has been with Underhill since 2010, working out of their head office in Burnaby. He brings with him extensive experience in a broad range of survey related fields such as land development, industrial sites, construction, railway, boundary research and legal surveys.  Underhill’s Burnaby office is a high paced work environment with many demanding and complex projects; throughout his ten years at Underhill Jon has been
involved in many of these projects both large and small. His surveying career has taken him throughout British Columbia, Alberta, Saskatchewan, Yukon and parts of the United States.

Jon would like to thank all of his coworkers past and present for helping to shape him into the surveyor he is today. Special thanks to Chris Cryderman, President of Underhill and Chris El-Araj, Managing Partner for having the confidence and support to bring him into the fold.

Jon was raised in Corner Brook, Newfoundland and educated at the College of the North Atlantic (CNA) and the British Columbia Institute of Technology (BCIT). Jon lives in Burnaby with his wife Jessica, who has been unwavering in her support, where they enjoy spending time in the
outdoors. 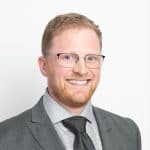 Ryan gained his P.Eng. and CLS designations in Yellowknife, NWT. He has extensive experience throughout the Arctic region in all three territories, in the western provinces, and has performed hydrographic surveys in the Gulf of Mexico and Trinidad. Ryan’s history with Underhill began in 2008, working alongside Sandy Cooke, for Carl Friesen, Vice President of Underhill, in Whitehorse. Since this time, Carl has been a mentor and advisor to Ryan.

In 2016, Ryan won two National David Thompson awards for a research project performed on the Ice Roads of NWT. The project involved precise, high frequency observations of ice deformation from trucking convoy traffic and other loads applied to the ice.

Ryan was raised in Medicine Hat, Alberta, and educated in Geomatics at Lethbridge College and the University of New Brunswick (Fredericton). He’s married to Christine Schuler, whom he met in Yellowknife. Ryan and Christine have two young boys – Graham, and Eric.

Since 1913 Underhill has built a long-standing reputation of excellence in serving clients throughout North America and the world. Underhill’s company philosophy is structured upon our commitment to people and for that reason we have fostered a corporate spirit that promotes education and creativity. We believe that combining experience and integrity with technology supports the essential growth necessary to service the rapidly developing needs of our clients.