Posted at 13:10h in In Memorium, News by Underhill

It is with great sadness that we announce the passing of Frederic Bruce Underhill. 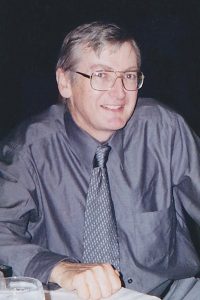 He was born in Vancouver B.C. in 1947 to the late Clare and Helen Underhill. Bruce attended UBC and BCIT, receiving a Diploma of Technology in Surveying, and received his BCLS Commission in 1975. That same year he joined the Underhill and Underhill Surveying (which was started by his father and uncle) partnership and received his Dominion Land Surveyor (CLS) Commission in 1978. Throughout the 1970s until the mid-1980s, he worked and travelled extensively in B.C. and the Yukon. He managed and grew the firm’s Whitehorse office to be the largest Land Survey company north of 60Â°, guiding surveys in Whitehorse and the entire Yukon while also contributing significantly to the firm’s many Land Claim surveys across Nunavut, Northwest Territories and Yukon.

In 1972, he married his wife Dawn, followed by the birth of his son Shawn and daughter Kelly. In 1984, he relocated his young family to the Whitehorse office and managed the office from 1986 until his retirement from the firm in 2008.

During his many years of practice, he served on several boards/committees which include Chair of the ACLS Yukon Regional Group, ACLS Council becoming President in 1993, Surface Rights Board of Yukon from 1996 to 2005 and City of Whitehorse Board of Variance from 2003 to 2005. Bruce received the Tim Keopke Award of Merit in 2018 for advancing excellence in surveying and his extraordinary contribution to the future of the profession.

Following his retirement from surveying, he served as Executive Director of Engineers Yukon from 2008 to 2012 and continued to serve as a member of several Engineers Yukon committees.

We would like to thank all the doctors, nurses and medical staff plus the many Homecare nurses who supported us through this challenging time. We appreciate each and every one of you for your care and kindness.