Posted at 14:32h in In Memorium, News by Underhill 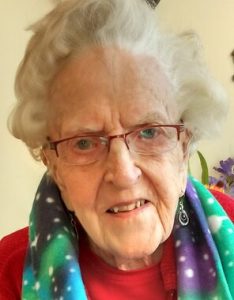 Helen, the matriarch of the Underhill Family, was also known as “Mother, Grandma, Grannie, Great Grannie or GG” to her family and many grandchildren, great-grandchildren and great-great grandchildren.

Helen met her husband, one of Underhill’s founding partners Frederic Clare Underhill in 1944 and they were married in January 1945. Helen and Clare’s family grew with the birth of their daughter Patricia, in 1946 and son Bruce, in 1947.

While raising her own two children, and to the present day, Helen had a huge presence in the lives of her step-sons’ families and their many children. All of her 16 grandchildren and many of her 30+ great grandchildren will remember her for her enjoyment and zest for life, sense of humour, and the support and encouragement she has given us all. Helen was also one of the guests of honour at Underhill’s 100th anniversary celebrations in 2013, which was also the same year that she turned 100.

We will remember Helen as the inspiration she was to all of us and will miss her dearly.