Posted at 09:28h in In Memorium, News by Underhill 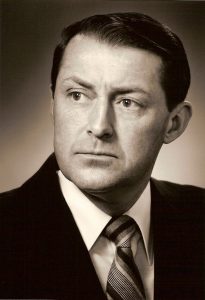 It is with great sadness we at Underhill hear of the passing of Jim Sharpe, BCLS. Jim had a long and storied career at Underhill’s. Jim came to work at Underhill & Underhill after he was introduced to Clare Underhill by his old pupil, Ken Wong, BCLS, in 1955. In Ken’s letter to Clare he wrote:

I am dropping you a few lines inquiring whether you, Jim, Dave, or Art will be taking on an article pupil the coming year. There is here, a young fellow, Jim Sharpe, aged 20, who is very earnest in becoming a qualified Land Surveyor…

… You will find him, as I have, a very energetic, willing, apt, and keen Surveyor. He is prepared to assume any duties required of him, and is available on a moments notice. 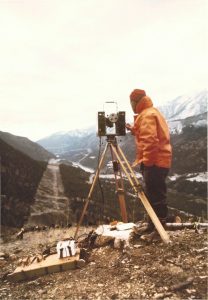 Underhill’s 1968 brochure cover, photo is of J.W. Sharp measuring a distance with a Geodimeter Model 6, on Pavillion Mountain, during a BC Hydro Transmission Line Survey 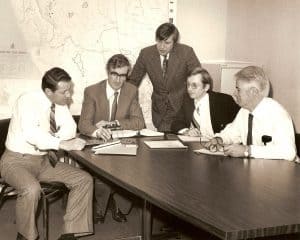 Jim was the Vancouver office manager for many years. He retired from the partnership in 1980, and moved to Cranbrook, taking with him Keith Ekman, BCLS. In Cranbrook they formed Sharpe & Ekman. Jim was elected to the Board of Management of the Association of BC Land Surveyors in 1989, and served as president in 1992.  He was awarded Life Membership in the Association in 2001.  Jim, while at Underhill’s, articled quite a number of Land Surveyors into the profession, including:  Tim Koepke, Samuel Maynes, Philip Asher, Keith Ekman, and Martin Schulze.

He will be sorely missed.