Posted at 14:26h in Awards, News, Our History by Underhill 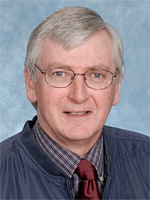 March 2018: Victoria, BC.: The Partners of Underhill & Underhill and the staff of Underhill Geomatics Ltd. congratulate retired partner Bruce Underhill, DLS, BCLS on being the fifth recipient of the Tim Koepke Award of Merit. This award was named after Tim and created to recognize individuals who have made an extraordinary contribution to the Association of Canada Lands Surveyors (ACLS).

Long before the actual award (say February 15th) a little soirée was held in Whitehorse.  Titled the “Ernie Cook Night & Underhill Reunion Party”  it brought together Underhillions from the early days of the Whitehorse Office, up to the present.  When everyone who nominated Bruce for the award was in attendance it was pretty hard for them not to spill the beans.  They did.  In a big way. It was a great reunion.  Thanks to Ernie Cook.  We all miss ya! 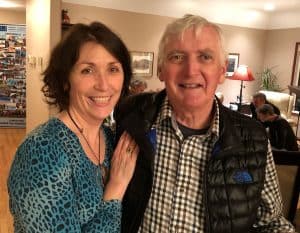 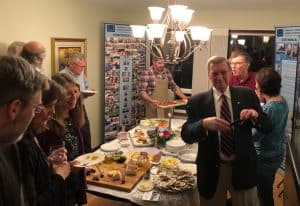 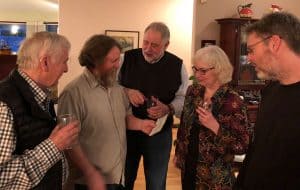 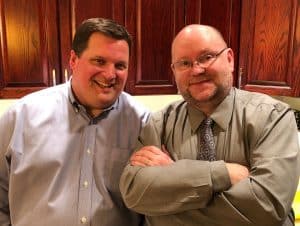 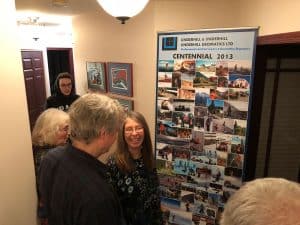 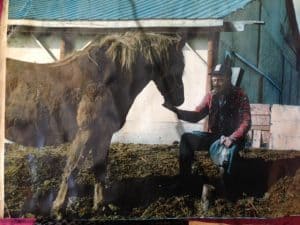 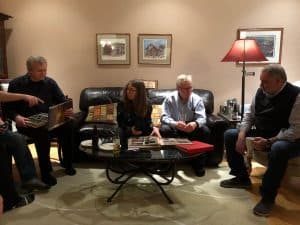 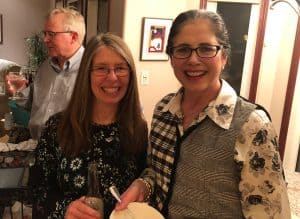 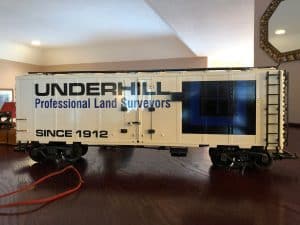 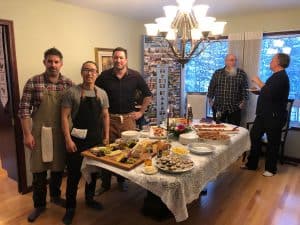 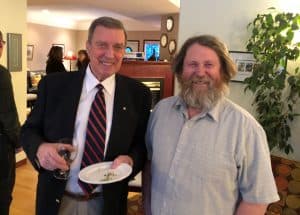 The award was announced at the Joint Canadian Hydrographic and National Surveyors’ Conference (CHC-NSC 2018) this March in Victoria, BC. Jean-Claude Tétrault spoke at the presentation from the following:

Bruce Underhill’s career started with summer work for his father and uncle at Underhill & Underhill in the mid-1960s in the lower mainland. Southern BC transmission line R/W’s in BC’s Cariboo Country and large timber land parcels in the Duncan River valley were the flavour of the day.

In 1966 Bruce attended the University of BC in the Faculty of Science. In 1972 he transferred to BCIT and received a Diploma of Technology in Surveying.

Through the 60s and 1970 Bruce was mentored by his father, uncle, brother and other Land Surveyors in the Underhill firm, obtaining his BCLS Commission in 1975, having Wm. G. Robinson, DLS (CLS), BCLS, PEng as his Master. He joined the Underhill partnership that same year and received his DLS (CLS) Commission in 1978. All through the 70s and until the mid-1980s he travelled and worked extensively throughout BC and Yukon, managing numerous large and small projects too numerous and diverse to list. As one might expect, having been the youngest of a successful clan of Land Surveyors, he was expected to toil and succeed on the toughest and most difficult projects the firm had to offer and succeed he did. All the while his wife Dawn and his two children understood his lot and supported him in his often remote assignments.

In 1984, he relocated to the firm’s Whitehorse Office to assist in developing the firm’s northern operations, joining Tim Koepke, DLS (CLS), BCLS, PEng. In 1986, after Tim’s decision to become a land claim negotiator for the Federal Government, Bruce began managing the Whitehorse office and remained there and in that position until his retirement from the firm in 2008.

Bruce’s resident career in Whitehorse spanned 22 years, where he skillfully guided the continued building of a lasting professional survey enterprise in Yukon. He supervised many large projects involving complex legal issues and detailed logistical planning. He managed and grew the firm’s Whitehorse office to be the largest Land Survey company north of 60°, guiding surveys in Whitehorse and the entire Yukon while also contributing significantly to the firm’s many Land Claim surveys across Nunavut, Northwest Territories and Yukon.

He made many early contributions to the profession under the CLS system and in northern Canada. He is an expert on the Yukon Quartz Mining Act, early Photogrammetric project design and Land Titles Act surveys. His commitment to the highest standard of integrity, client satisfaction and innovative approaches made him a respected surveyor in Yukon.

Bruce’s contribution to the CLS system itself and the ACLS spanned an important development era of Land Surveying North of 60° and evolution of the ACLS to a self-governing profession. He served as Chair of the ACLS Yukon Regional Group numerous times since 1984. He served on the ACLS Council becoming President in 1993. And he continued to contribute to the ACLS on Committees leading up to the ACLS becoming self-governing in 1999 and beyond.

In the words of Tim Koepke, CLS, BCLS, PEng:

“One would be hard pressed to find a Canada Lands Surveyor who has made such an extensive and valuable contribution to the profession and to the improvement of our practices in the ever-changing modernization, designed to better serve our clients, government and the public interest.”