Posted at 13:53h in Awards, News by Underhill

“The David Thompson National Geomatics Awards were created to honour the innovation, dedication and creativity of professional surveyors in Canada.

The program is presented by Professional Surveyors Canada and the Association of Canada Lands Surveyors to celebrate professional excellence in the field of geomatics. Named after David Thompson, an explorer and surveyor who almost single-handedly mapped Canada’s vast, unknown interior 200 years ago, these awards represent the pinnacle of work.”

The awards are given out each year at the National Surveyors Conference. 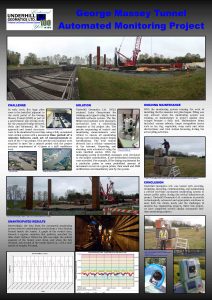 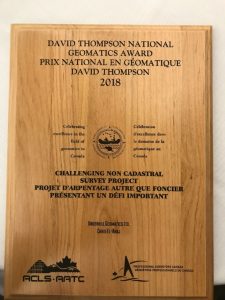 Also at the conference Christopher de Haan, CLS, BCLS gave a presentation on the Survey of Natural Boundaries Using Drones. This presentation is related to the 2017 winner of the David Thomson Award for Innovation in Cadastral Surveying – Christopher de Haan, CLS, BCLS | Lorelei Smith, BSc, AScT Poster – Survey of the Limit of the High Tide of Theodosia Inlet

Underhill Geomatics Ltd. was also a runner-up in 2017, and was shortlisted and named a finalist in 2011.

Underhill was shortlisted for a David Thompson Award in 2011 and ultimately named a finalist in Innovation in Geomatics, and Unusual Application in Geomatics – Christopher Raymond El-Araj, BCLS | Mark Mason, BCLS Poster – 3D Laser Scanning for the Seismic Upgrade of Science World, Vancouver