Posted at 18:19h in Awards, News by Underhill

16th March 2018: Whistler, BC: The Association of BC Land Surveyors posthumously honored retired Underhill partner Ivan J. Royan with it’s Lifetime Achievement Award, at it’s 113th Annual General Meeting in Whistler, BC. The Lifetime Achievement Award is presented to a member who has contributed many years of valuable service to the public and dedication to the land surveying profession and who is no longer actively practicing land surveying. Ivan is the 21st BC Land Surveyor to receive the award. 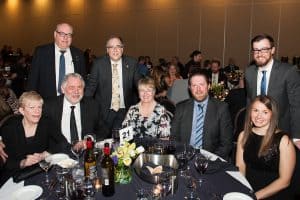 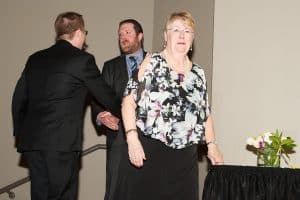 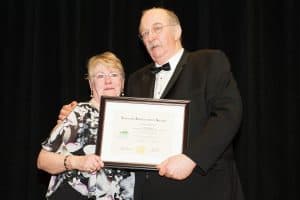 The award was presented to Ivan’s widow Valarie Royan by Association President Brian Brown. Valerie was accompanied by her son Stephen Royan. Kelly Stofer, Secretary/Registrar of the Association, introduced the presentation, as follows:

“The Lifetime Achievement Award is presented to a member who has contributed many years of valuable service to the public and dedication to the land surveying profession.

In many surveyor’s careers, there’s a project that stands out. For Ivan, that project was the BC Rail Tumbler Ridge Branch Line which included the survey of the Table and Wolverine Tunnels between 1980 and 1983. Ivan managed seven survey crews running some 30km of rail grade, placing 16 bridges, survey control networks over two mountain ranges, and two tunnels surveyed and driven from both ends to meet in the middle. Tunnels that don’t meet in the middle can end careers, and before the breakthrough, Ivan joked that he had already bought his ticket to South America. He never needed the ticket. Both tunnels met in the middle. They were almost perfect. When it was completed, the 9.6 km Table Tunnel was the longest tunnel in the Canadian Rockies. This was the highlight of Ivan’s career, and his reward was partnership in Underhill & Underhill.

But none of this is surprising. Ivan grew up on his family’s sugar cane farm in Bundaberg, a town in Queensland, Australia. Ivan’s father worshiped the ground, and his hard work resulted in the best cane fields around. He passed this work ethic onto his children. You might say Ivan was raised to serve the land.

Ivan loved coming up with new ways to survey things, and he encouraged young surveyors to come up with new ways of solving problems. Many lunch hours in the old Underhill & Underhill Vancouver office were taken up with Ivan leading some brainstorming discussion on how something could be done different or better. He loved the back-and-forth banter. If someone came up with a crazy new idea, or contraption, Ivan was “all in”. If it fell a little short of expectations, Ivan was the one who would “will it” into working with his persistence, and his “never give up” attitude.

Ivan was instrumental in introducing British Columbia to GPS satellite positioning. It was another “new wheel” with all the problems and headaches. In 1986, Ivan’s photo control survey as part of a Flood Plain Mapping Project in the Kootenays was the first GPS survey to be delivered to the Provincial government. This would lead to more GPS photo control surveys with a newly created consortium of 12 BC land surveying firms for the TRIM Digital Mapping Program from 1987 to 1991.

First Nations Land Claim surveys in the Arctic began in 1986 and Ivan worked for around two decades in the Yukon, North West Territories and Nunavut; producing hundreds of plans.

Ivan’s achievements are numerous. There aren’t many places in this Province he hasn’t surveyed. Ivan was fair, honest, loyal, hardworking, and determined. He never cut corners. There was only one way with Ivan – the right way.

After a 4 ½ year battle with cancer, Ivan passed away in June of last year; but the evidence of his work is etched on the land in British Columbia forever. For contributing so many years of valuable service to the public and dedication to the land surveying profession, the Board posthumously presents Ivan Royan with the Lifetime Achievement Award. Val and Stephen, please come forward and accept this award on Ivan’s behalf.”

Following the presentation the Secretary continued with, “I would like to call on Chris Cryderman, President of Underhill & Underhill, to say a few words.”

Chris Cryderman: “Ivan’s achievements were numerous. There aren’t many places in this Province he hasn’t surveyed. In all his work Ivan was fair, honest, loyal, hardworking, determined. He never cut corners. There was only one way with Ivan – the right way. Failure was never an option. It was hard for him to let go of things he was passionate about, and sometimes his pride could get the better of him.

Ivan transferred his work ethic to his boys (Stephen & Anthony). Val says she got more grey hairs over the boys when they were teens than Ivan (he was out of town a lot). Getting Ivan to go on a holiday was like pulling teeth according to Val. It seemed every time they went on a holiday Ivan always seemed to have some job he had to finish at the last minute. Val would have to pick him up at work and drive him to the airport just to get away. It drove her crazy!

In 2016, Ivan finally retired. In typical Ivan style, he decided to go on his dream holiday. He went to Manitoba to help bring in the grain harvest for Val’s cousins Clare and Betty, and their son Derrick. He always dreamed of doing it. Now he had the time. His chance to combine a few thousand acres of grain. Uncle Ivan (the cancer patient) had them working around the clock till 3:30 in the morning on one field. Ivan wanted to keep going but everyone was getting tired. “Best to call it a night before someone gets hurt”, they said. Ivan begrudgingly agreed. That night — it rained. Ivan was not too pleased, “We could have finished it! That’s Ivan. Like a freight train barreling down the track – unstoppable. When there is a job to be done don’t get in his way.

A few days before he passed away Ivan said, “Surveyors have taught me a lot.” For all of the BC Land Surveyors who had the fortune to be acquainted with Ivan please know that he appreciated your counsel, and comradery, as much as you did his. He learned from you, as you learned from him. He was always excited about meeting new surveyors, and would talk about how impressed he was with their knowledge, maturity and professionalism. He loved Surveying like few others, and he loved and respected all those Surveyors who shared even a tiny part of his passion for the craft. He will be sorely missed.”