On “Frostbite and fuel shortages: The logistical challenges of a military operation in Canada’s Arctic – The National Post”

22 Mar On “Frostbite and fuel shortages: The logistical challenges of a military operation in Canada’s Arctic – The National Post”

Posted at 13:44h in News by Underhill

I picked up the newspaper this morning and started to read through it. Flipping the pages while drinking my morning coffee I’m faced with the headline: Frostbite and fuel shortages: The logistical challenges of a military operation in Canada’s Arctic. The photos brought back memories of the late 1990’s of working in the high arctic on the Nunavut Land Claim Surveys. My eyes hit a familiar face. Reading the caption confirms it. It’s Matthew Manik! One of our assistants on the Resolute/Eureka Nunavut boundary surveys in 1998. Now he’s a Master Corp. in the Canadian Rangers, teaching the Armed Forces how to survive in the Arctic.

The 1998 survey is now considered the highest latitude land claim survey in Canada (CLSR registry), it was an historic land claim survey. Boundaries were surveyed on Devon, Ellesmere, and Axel Heiberg Islands. Devon Island was otherworldly, the place where NASA goes to simulate Mars on Earth. Axel Heiberg Island had petrified(more like mummified and freeze-dried) 40 million year old tree stumps. Resolute was like an oasis in the middle of a frozen desert. The Polar Continental Shelf Program was there with their Arctic Logisitics Hub. They had spare everything – unheard-of most anywhere else so far north. We even borrowed one of their helicopters when ours broke down. Eureka was a lot more remote, halfway up Ellesmere Island, 1,100 Km from the North Pole. The most northerly place in Canada where you can still communicate with geosynchronous satellites over the equator. The satellite dish was pointed at the horizon. The only place further north was Alert at the northern tip of Ellesmere Island, the northernmost permanently inhabited place on Earth. Too far north for satellites, their communications came via land-line from Eureka. Quite a place.

All the photos below were taken on the “night-shift”. We learned early, that if you wanted to be efficient in the land of the midnight sun, you needed to work around the clock. Two, 10 hour survey shifts per day. To do it we needed day and night shift crews, two pilots, an engineer who maintained the helicopter between shifts, a GPS processor, and a CAD draftsperson. Fuel for the A-Star was cached all over the place by Twin Otter out of Resolute. 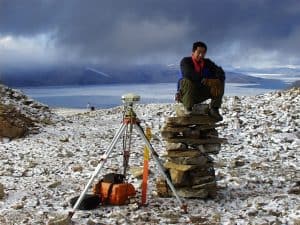 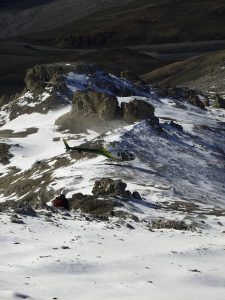 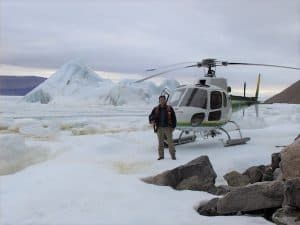 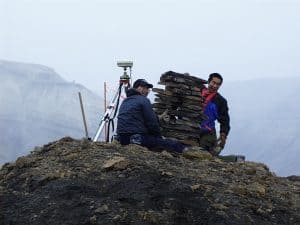 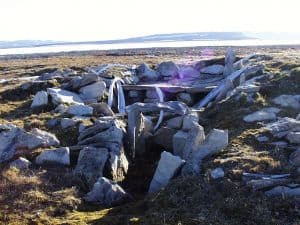 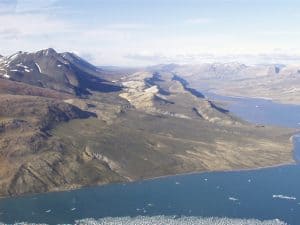 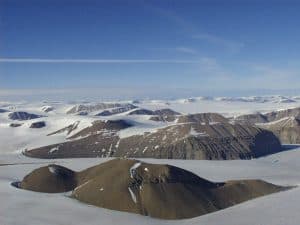 Clyde, Pilot, and Chris at the Lady Franklin Memorial to the Frankin Expedition, on Beechy Island, NU, during Nunavut Land Claim surveys on Devon Island, 1998. 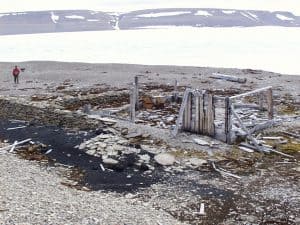 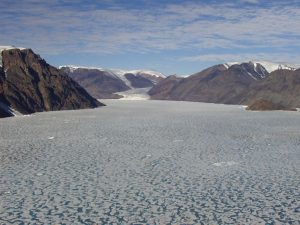 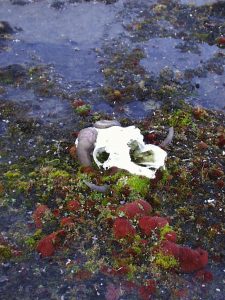 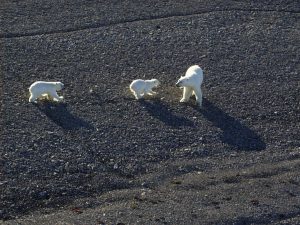 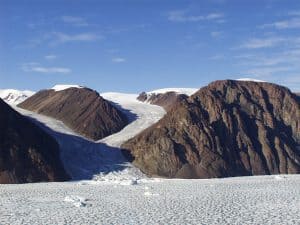 Realizing we were not that far from the north pole, it became something of a half-joking pipe-dream to fit in an expedition to it. “If we have the money. If we have the time.”, I’d say. We were using Twin Otters out of Resolute to cache fuel for our Nunasi A-Star Helicopter. When I broached the subject with the Twin Otter contractor they said, “Yea, we’ve done it.” I was pretty exited. This could really happen! It was short lived. The logistics on the Islands were simple compared to going out and and landing on the arctic ocean at 90 degrees North. “You need two planes because you never know if you are going to have to mount a rescue mission. You’ll have to cache fuel on the ice. It needs a beacon, because the ice and your cache are moving. It’s not so simple.”, the base manager said. That’s the day we lost the pole. Getting to some places in the arctic, despite all our modern technology, is still more dream than logistical reality.