Measuring for a Photographic Record at Woodward’s Atrium – UPDATED

Posted at 20:27h in News by Underhill

Joel Nicholas Peterson provided an update on his recent photography showing at the Atrium at Woodward’s. Below is an excellent short documentary, by Nigel Berringer of Parallelogram Pictures, outlining Joel’s artistic process and his impetus for undertaking the project. Additionally, there are links below to a number of news stories about it all (CBC, Petapixel, and VANCITY bUZZ). Our original news story regarding the measurement of his potential World Record camera obscura film negative, that formed part of the exhibit, follows these updates.

Before making way for condos, this Vancouver building became a giant camera – CBC Arts – The World Of Leah Collins

It is something to reflect on, in this era of “selfie sticks” and “photobombing”, where everyone with a cellphone also has a camera, that it has been less than 200 years since photographic images were first “captured” from reflected light. In fact, it was in 1816 that French inventor Nicéphore Niépce combined the camera obscura (pinhole camera), which had been known for millennia, with a photo sensitive paper. With it, he produced an impermanent image that disappeared quickly when brought out into the sunlight. Ten years later, in 1826, Niépce managed to make his images permanent. For a century and a half, the production of these images would be precious and expensive. It is only in the last few decades of the digital revolution that photographic images have become the commonplace disposable items they are now.

Currently showing at The Atrium at the old Woodward’s site (333 Abbott Street, in Vancouver), are images which harken back to the time of Niépce. Captured with a huge camera obscura, using a building itself as the body of the camera and an 1/8 inch hole in a wall as the pinhole, the resulting film negatives are massive. One in particular may be the largest (in surface area) single exposure film image ever made.

Joel Nicholas Peterson is the photographer. He contacted the BC Land Surveyors at Underhill to measure this negative for a submission to the Guinness Book of World Records. Measuring approximately 4 feet by 13 feet, the negative shows a view of Granville Island between buildings at Howe St. and Beach Ave. in the west end. Said Jonathan Dyke of Underhill’s, “That’s the biggest negative I’ve ever seen!” 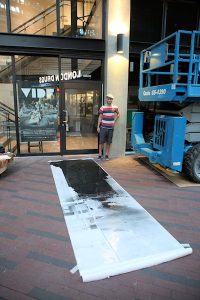 Joel Nicholas with the largest of his camera obscura negatives. 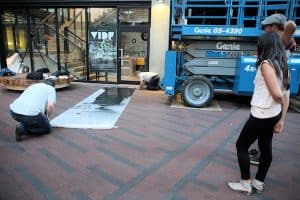 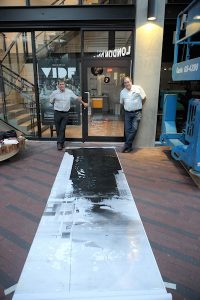 Hard to visualize a negative… 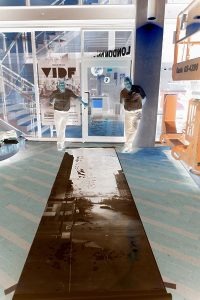 …better when it is a positive.

According to Joel, the exposure of the film image took 36 minutes. The exposure time was arrived at by trial and error. Quite a feat when you consider the focal length was 9 feet, a number more like a telescope than a camera. Given the numbers, Chris Cryderman of Underhill’s commented, “A shutter speed of 36 minutes and an aperture of f/864… These are not numbers I associate with photography. This is extreme photography.” Clearly, not something you could ever hope to capture at the end of a selfie stick!

The negatives and photos are scheduled to be on display for two weeks.