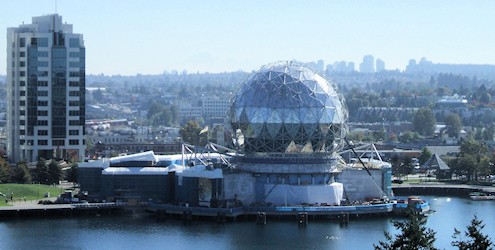 Underhill performed a detailed as-built survey of the underside of the Science World facility. All surveyed features were then transferred topside and used to determine the precise location of the coring holes. The challenge was to locate a myriad of complex features in a short time frame. The construction schedule was brief, and the area was completely flooded throughout most of the day due to the tides. The space could only be accessed in four hour blocks before and after low tide. At the time of the survey, the low tides were occurring at approximately 11PM.

Three dimensional laser scanning was determined to be the most cost-effective, efficient and comprehensive method to survey the underside of the facility. A precise survey control network was established, followed by nineteen laser scans, each containing 40 million data points, with the final “point cloud” containing over 720 million points. It was estimated, at the time, that seven to ten nights of conventional total station surveying would have been required to capture the features. Underhill completed the laser scanning in just two nights.

The control survey was adjusted using least-squares and the scan data registered to it. As-built features of concern were extracted from the “point cloud” and precisely surveyed on the top of the deck to insure that coring would not interfere with what was below.