The programs were all run on the UBC Computing Centre’s IBM 1620 and 7040. Forms were employed to record survey data for keypunching on punch cards. The cards then had to be taken to UBC to produce the results. Work would be accumulated until there were sufficient data in need of processing to justify the travel to UBC and back. Consequently, the turn-around time could be longer than desired. In the mid 1960’s, C.D. (Dave) Underhill and A.T. (Art) Holmes hit on the idea of Underhill purchasing its own computer. Control Data LGP-30’s had been around since 1956 and, being an older machine, were being sold off at an attractive price. This could greatly decrease turn around time and provide opportunity for in-house computing which, at that time, was largely non-existent in the industry.

The LGP-30 and Stanley P. Frankel

The LGP-30 was a vacuum tube “portable” computer weighing 800lbs. It had a magnetic drum memory of 4096 32-bit words and required 1500 watts of wall-socket supplied power. It was designed by Stanley P. Frankel.

Frankel had been a post-doctoral student under J. Robert Oppenheimer, at Los Alamos, New Mexico, in 1942. There he, and others, used electromechanical calculators to determine that a uranium fission chain reaction would produce an atomic explosion. They also made the first calculations of the critical mass of uranium necessary for the task. This experience led him, three years later, to perform calculations for developing thermonuclear (hydrogen) bombs. He ran these simulations on ENIAC, often cited as the worlds first electronic computer.

After the war, Frankel got caught up in the ‘red panic’ of McCarthyism and was stripped of his security clearance because his father had once been a communist. Cast out of nuclear and military computer research, Frankel later designed a computer inspired by his brush with ENIAC. He produced what he considered a minimal computer design, which he named MINIAC. Librascope, in California, licensed the MINIAC design from CalTech (Frankel’s employer) and put it into production as the LGP-30. The LGP-30 is considered to be the first personal computer. Around 500 were produced.[45]

Programming on the LGP-30 was done in machine code. That’s what ‘real programmers’ used before the advent of computer languages like Cobol, Fortran, and Basic.[46] There were only 16 ‘commands’. Everything, except for add, subtract, multiply, and divide, had to be programmed. Square root? Write a program. Sine or Cosine? Write a program.

For the “Underhill Computing Center”, modifications were made to the LGP-30. The LGP-30 paper tape punch/reader was modified to work with telex tapes. In this manner, data could be telexed from the field to the computing centre in Vancouver where it was punched out on paper tape. The paper tape from the Telex could then be fed into the LGP-30 for processing. The output of the LGP-30 would be punched paper tape, to be fed back into the Telex, and results printed at the field survey end. It was a very sophisticated system for its time and wasn’t really matched in field-office-field communication sophistication until the introduction of the Internet in the 1990’s, some three decades later. (story continues below image gallery) 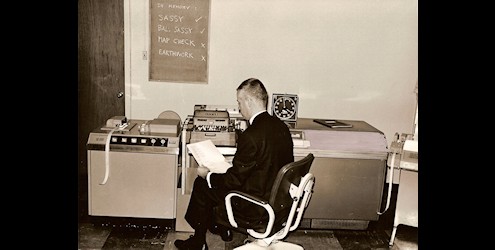 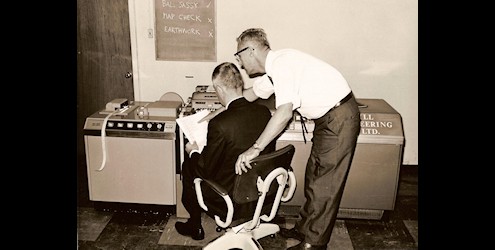 A.T. Holmes instructing W.G. Robinson on the operation of the LGP-30. The chalk board indicates the the program BAL. SASSY is loaded in the machine. 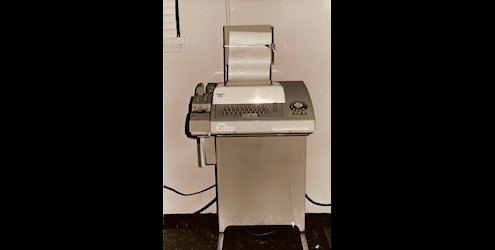 Telex machine was used to print tapes of field collected data, for LGP-30 processing, and send results of that processing back to the field crews. Three decades before the Internet. 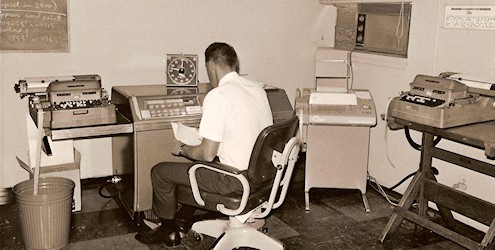 T.E. Koepke operating the LGP30. Computer time was charged by the minute hence the darkroom timer. The Telex (to Tim’s right) was for recieving data from, and sending results to, the field crews. The paper tapes hanging down from the various units were used to load programs and input data/output results. 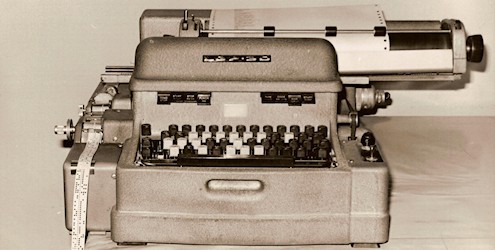 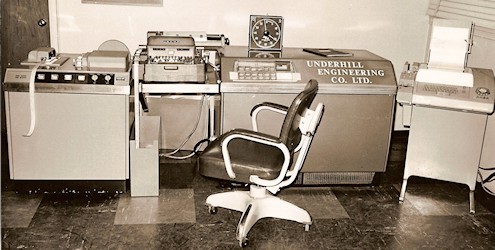 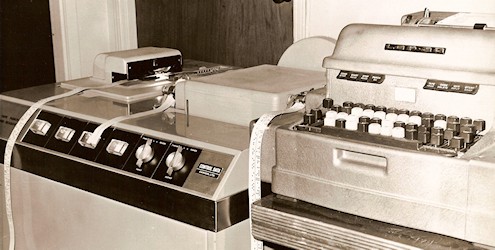 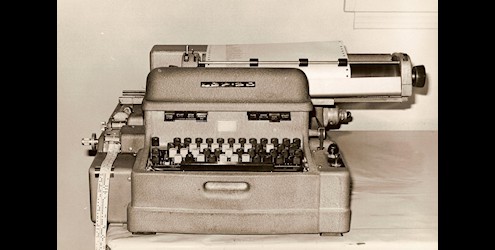 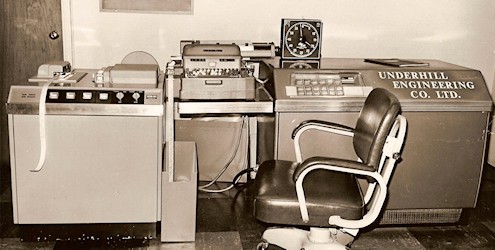 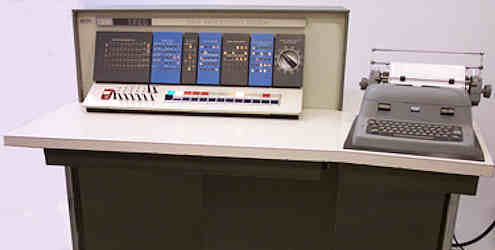 Underhill used an IBM 1620 similar to this one atr the UBC computing centre, in the early 1960’s, for surveying and engineering computing. Souce: http://commons.wikimedia.org/wiki/File:IBM_1620_Model_1.jpg

Underhill offered its computing services to the surveying and engineering industry. From April of 1965, and into the very early 1970’s, numerous Land Surveyors and Companies utilized Underhill’s computing services. These included:

The introduction of the microprocessor, and Moore’s Law, spelled the end for the LGP-30. In 1972 Hewlett Packard introduced the HP-35 calculator, the first hand-held scientific calculator. Then in 1974, they introduced the first programmable calculator, the HP-65. It was touted as “the smallest programmable computer ever”. Magnetic card programmable, with 100 lines of program memory and 64 functions, it was light years ahead of the LGP-30 (actually, only 18 years ahead). The HP-65 was not cheap. In 1972 it cost $795 which would be about $3,500 in 2010. No wonder they locked and glued them to their desks!

Long after both Dave Underhill and Art Holmes had retired from Underhill’s, they still from time to time would produce marvels of computing science running on hand-held, Basic programmable pocket computers. Dave managed to shoehorn a complete COGO, adjustment, and area package for 45 points into 4Kbyes of RAM on a Sharp PC-1401, in 1985. Art Holmes used a Sharp PC-1500 for computing related to the grinding of telescope lenses and to polar precession and nutation in astronomy.

Underhill’s LGP-30 still exists today and is on display at the computing centre of MacDonald Dettwiler & Associates Ltd., in Richmond, BC. It was featured in an article in the Province newspaper. An LGP-30 was used by Vern Dettwiler, one of the founders of that company, when he was at UBC. (He was a classmate of Art Holmes.) It is referred to as one of the oldest computers in Vancouver.